Welcome to the Zoo!

When asked "Do you have any pets?", we say "Yeah, we've got a damn zoo..."   We've got no less than nine pets. We have 4 snakes (a Children's Python, an anerythristic corn snake, a desert-phase Cal king, and a Ball (Royal) Python; 3 cats, two multi-colored, one orange; a rat; and a DevilBird™ (Lutino Cockatiel). So as you can see, we've got quite a zoo going here. And people wonder why we don't have kids...

The Children's Python (No Name Yet...)

Our largest and favorite snake is our Children's Python. She's about four or five years old, around 5 feet in length, and was our first anniversary present (1995) to each other. Neither of us had seen or heard of this species before, and the guy at our reptile store/head shop showed us two of them and we knew then we had to have one. These are the tamest and friendliest snakes you'll ever find! It was right around our first anniversary, so.... We got one.

We had two king snakes, both of them were bought on our christmas vacation in 1996. We were up in the Detroit area, and since we knew BHB Enterprises was located near where we were, we decided to stop by and pick up our new snakes in person. We were not disappointed. We're not kidding when we say that BHB Enterprises (and owner Brian) is the best snake breeder in the business. If you're interested, he advertises in Reptiles magazine, or email me for contact info.

Both of our Kings are California kingsnake sub-species (scientific name: Lampropeltis getula californae ssp.). One is a desert-phase (black and white banded) named (quite appropriately sometimes!) Striker. The other is (was) a chocolate (coastal) phase named Chocolate. Real creative, huh? Chocolate, unfortunately, has been deceased for quite some time now, but we leave mention of him and his picture here to honor his memory. He was a good snake. :(

Kingsnakes are great snakes because there are literally hundreds of different color and pattern morphs available, they are small and easy to maintain (none of them ever get over 5 feet), and they are generally very, very tame.

We also had two corn snakes (scientific name: Elaphe gutatta gutatta ssp.). One is an aneyrthristic (lacking red pigment) named Vlad. He was a Halloween present from me to Lizz back in 1996. He has more than lived up to his name, torturing poor innocent little pinky mice back when we couldn't get frozen. By the way, we don't feed any of our snakes live prey. It's stupid, no smart snake keeper does it, no good breeder does it, and neither do we! The other corn was a "snow" named, creatively enough, Snow. She was purchased on the same christmas trip as the Kings. Unfortunately, she also passed on some time ago.

Corn snakes are also great beginner's snakes (and they're great for advanced keepers too!!!) because they are very tame and manageable, stay pretty small, and also come in a wide variety of color and pattern morphs.

Our Royal Python is a new additon to our reptile collection. We've had him/her (gender unknown - we usually refer to it as a female though - she seems to have a female energy) for about 2 months now. She's quite young, probably shipped to the pet store before her first feeding even. We've got her feeding and we're sure she'll do just fine. She has an amazing amount of gold in her markings, and we think she's going to be a very beautiful snake.

Most of our snakes (except the Children's Python, but we're working on it) are housed in Vision Herpetological cages. These are quite simply the best cages on the market. They are made of very high-impact ABS plastic, are made to stack without expensive racks, and having sliding tempered glass doors on the front. They also have a recessed spot in the roof for a standard 10-inch dome light fixture for heat/light. These cages are quite inexpensive, especially for the quality. We highly recommend them. They are avaailable from several large reptile supply shops.

Three cats live here now, and a total of four have been with us in the past. One of them is a stubby-tailed multi-colored cat named Akasha. She's about 6 or 6 ½ years old, and Lizz got her at a New Age store about a year before we met. The other was a little black demon named Pixel. We bought her in spring of 1994 when we were still living in Michigan. Pixel was probably the most loving albeit strange cat we've ever known, and we miss her a great deal. She died in June of 1999 suddenly. She was acting very normal, brushing up against us, totally cat-like, then walked to the middle of our dining room floor, and simply fell over, dead. :( It is one of the saddest things either of us has ever seen. Here is a picture of Pixel and Akasha - this photo might give you the impression that they liked each other, but don't be fooled.... :) 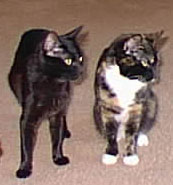 The other two cats are relatively new here, and both are quite young. One is a 1 ½ year old multi-colored near-feral (but sweet as hell) beast named Isis. The other is a 6 or 7 month old orange cutie that we haven't named yet. These two play with each other constantly. Akasha, being older doesn't like to play rough, but these two go at it like crazy! We'll have pictures of these two demons soon.

We call her a DevilBird™ because she squeaks really loud a lot of the time. But when she's not squeaking, she's pretty cute. Her "official" name is Goofy, but we usually just call her DevilBird. She doesn't seem to give a damn. She is a lutino Cockatiel and we bought her back around christmas of 1995 from a local breeder when she was about 8 weeks old. She entertains us by flying around at very high speeds and teasing the cats, who are quite terrified of her.


We're working on getting and editing some good pics of our other animals and will get those up as soon as we can! Keep checking back...


Use your browser's back button to get back to where you were...